There has been much debate and argument about building a new airport on the Thames Estuary outside London, with the emphasis on replacing Heathrow Airport.

I believe there is an alternative strategy to deliver additional facilities and investment into the UK economy. MichaelsPort is a semi-public/private airport and offshore community created around such an airport to serve some of the public but separately provide a private airport and home for wealthy sponsors, corporations and governments wanting an accessible base close to London. 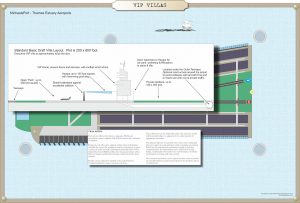 DRAFT Layout only, many other options available.

MichaelsPort has the potential to attract £45-90,000 million of investment into its construction and into the UK economy, and stimulate a range of industries, including the UK civil aerospace industry, the automotive industry and more.

Within it an enterprise sector can be established for public housing, using the Vertical Village concept to deliver a minimum 20,000 affordable homes and all associated amenities.

Potential benefits to the UK economy include new revenues to the Treasury from all investment spending (upto £30,000 million in new tax revenue over a twenty year period), new growth of the civil aerospace sector, investment in new housing, luxury furniture, the automotive industry and more.

This offers a unique alternative to relocating Heathrow while adding new air traffic capability to London.