MichaelsPort is not a true hub airport such as Heathrow, but this strategy does offer a new kind of hub, a MegaHub for the city. 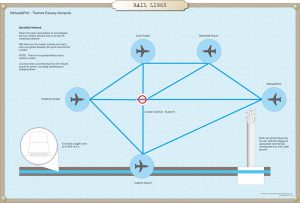 Maglev, based on the original work of British engineers led by Prof. Eric Laithwaite in the 1960s and disregarded ever since, will deliver rail speeds in excess of 400 m.p.h., reducing journey time to a few minutes from the city centre (approx. 15 minutes allowing for boarding, acceleration, sprint, deceleration, and disembarking).

The effect is comparable to a journey from one terminal to another and can thus bring all airports together as an effective simulated hub – the London MegaHub.  Air traffic may be redistributed throughout the network of airports according to demand, fog, snow on the runway.

This protects the existing investment in each community and prevents loss of jobs in Heathrow instead of the relocation plans.

At each airport the rail terminus is transformed into a Vertical Village to provide a subsidiary source of income, with housing (another 16,000 affordable homes) and light industry above and below ground.

The funding scheme for MichaelsPort include the cost of developing and delivering this MegaHub.  There IS NO COST TO THE TREASURY.